Scott and I took last Friday off and boy, did we take advantage of it.  We both did our various forms of exercise–me by getting my butt kicked in the hills of Tarrytown on a very muggy run, and Scott by taking a bike ride with an old friend but a new neighbor.  But then, the work began.  I picked up a yard of compost in Dad’s truck.  Scott got home about that time and we spread compost with a vengeance.   After a trip to Sandy’s for sustenance, we went back to the dirt place, this time for mulch.  Then we spread mulch with a vengeance.

One of the places we put both compost and mulch was in the bed by our porch, which wasn’t really a bed at all until we completed our rock project.  I think the evolution/finished product worked out well. 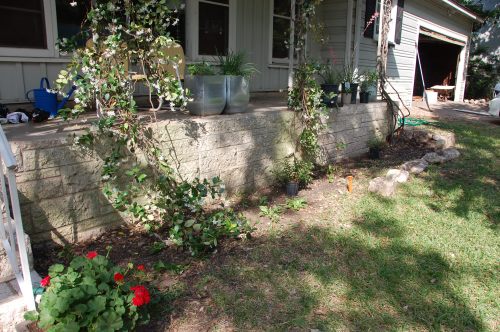 We found the rocks in various other parts of our yard, buried under leaves of course.

Hostas were already growing there, as was the Star Jasmine.  We added 3 Hypericum (St. John’s Wort) bushes which should have yellow flowers this summer and stay evergreen.  I think it will look really nice.  The Hostas will need a little love, since we basically buried them with compost and mulch but they are already poking back through again.

On Saturday, we cleared the side of the yard that has haunted me.  It is close to a busy street, and has some pretty heavy foot traffic.  I don’t think anyone had seen the grass in this section in probably 10 years.  We uprooted dead trees and plants, we unearthed beer cans, we cut back shrubs, we removed unruly vines, and we worked ourselves silly. The placement of the plants and trees in this section of the yard don’t make much sense and I hate how jumbled it looks.  But just by clearing out the dead, it made a world of difference.

It might not look like much, but it represents a lot of work!  We are trying to figure out what to do with this area of the yard.  I think we are going to make the whole area lining the busy street a bed.  We will keep the shrubs and the Magnolia tree and add a few more things as a barrier from the busy road.  We will get rid of what little grass is in the area, and add some dirt and mulch.  We can line it with more rocks found in the yard.

Just when I thought we were done for the day and I could retreat to the shower and then to the kitchen to make my Easter dishes, Scott decided it was time to install canned lighting on the porch.  And it really does look cool.  That story is to come.

This entry was posted in Home, Uncategorized. Bookmark the permalink.

2 responses to “Compost and mulch.”