I know it is weird to get rid of a fireplace, but when it was installed after the fact by the previous homeowner, it just seems easier to get rid of the thing.  (You might remember that discussion here.) That, or have a plumber fix the gas leak.  It might be that the 75 days of higher than 100 degree temperatures are making me delusional enough to think it will never be cold enough to build a fire, but I am delighted that the thing is gone.

When we were crawling the walls waiting for news about John, we decided to be destructive.  And in a matter of a few hours, we were without a fireplace.  Here’s the evolution.

Before any destruction began.

The first thing we did was remove the mantel.  It then went to hang out in the kitchen for awhile.

Next we chipped away at the tile to remove it from the sheet-rock.  We did, however, leave it on the floor.  We were too scared to see what it looked like underneath. 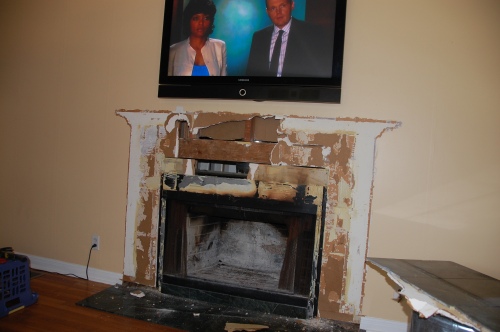 We did not capture this on camera, but we sawed off the piping that connected the fireplace to the roof leading outside.  We disconnected the piping in the closet on the backside of the fireplace.  We will fix the hole later.  For now, we have enough pipe left to keep from having a hole in our roof.

Next was we needed to determine how to get it out of our house. 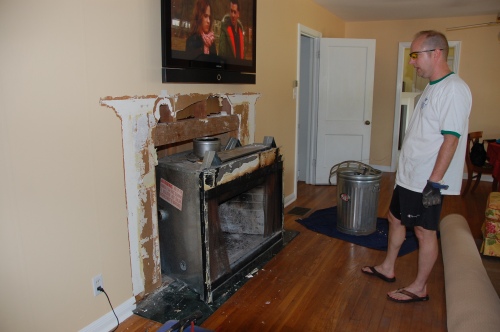 Scott thoroughly contemplated the removal while I posted “free fireplace bits” on Craigslist. My phone blew up with calls and within a few minutes, we had some interesting characters at our door wanting to get the thing off our hands.  Beautiful.  The guy announced that he had had a heart attack “yesterday” (really dude, are you sure??) and brought “help” to carry the fireplace since he was sick.  The “help” ended up being two very manly looking women.  The man did not lift a finger.  Strange. But it was free refuse removal.  We kept the doors locked the remainder of the day.

And this, my friends, is what you call a hole in the wall. 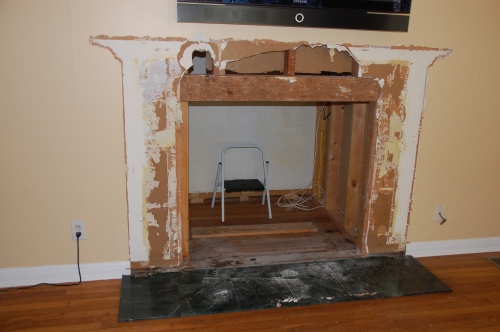 EmmaBeth and Marlee visited later that night and thought the hole was super cool.  They suggested keeping it for a puppet stage.  Not a bad idea.

Much to EmmaBeth and Marlee’s chagrin, however, their daddy sent his guys over this week to work their magic.  This is what it looks like now. 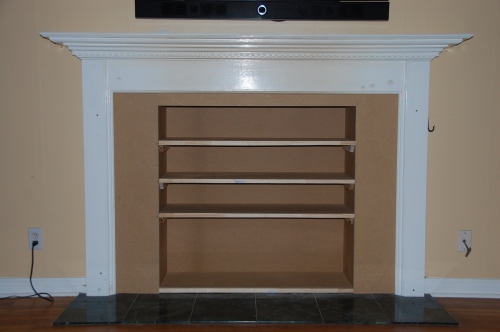 I think we will adjust the shelves a bit, and in the next few weeks they will get painted…along with the rest of the interior of our home.  I am thrilled.

We also got crown molding throughout the house.  This makes my heart pitter-patter.

This entry was posted in Home. Bookmark the permalink.

3 responses to “Fireplace be gone.”