I travel today to Abilene for my 10-year reunion.  I am looking forward to reconnecting with long-lost friends.  I absolutely loved my time at ACU.  I would recommend the school to just about anyone.  It is a very kind place to spend such formative years in one’s life.  But with this weekend approaching, I have had a few thoughts resonating in my mind.

In my head, I was the only single person graduating from ACU in 2001.  In actuality, I know there were others.  But when I left ACU after my senior year—with a high GPA and plans to attend law school, I felt like I had failed.  My parents met and married during their time at ACU.  My sister and her husband married 3 weeks after graduation from ACU.  Was I the only person in my family to fail at college by not meeting my spouse?  I do have one aunt who married “late in life” at the ripe age of 29.  Praise the Lord that I was not alone.

I remember my senior year at ACU.  I was named to the homecoming court.  Perhaps it was because I was a band dork in high school, but this honor was a huge confidence boost to me.  It was one of the first times in life that I felt “chosen” by my peers.  My observations of the homecoming experience have stuck with me for the last ten years.  A unique feature of ACU’s homecoming is the coming home court.  This is the homecoming court from 10 years prior who return and have a second homecoming court experience of sorts.  They ride in the parade, are introduced at chapel, and have a place on the football field at half time.  The year I was on the court, one of the members of the coming home court, was seemingly unattached.  (Gasp.)  She came to homecoming alone.  I thought about how sad and lonely it must be to come back to campus without even a boyfriend at such an old age—approximately 32 years old.  It seemed that she stuck out like a sore thumb.

I have no idea who that person was, but in spite of the fact that I felt so sorry for her, I do remember how cool she seemed.  While all of us were dressed very conservatively in the same manner I now dress for work, this one single woman had on tall boots (a new trend at the time), a short skirt, and sported a pixie hair cut.  She was tall, beautiful and stylish.  I would like to know who she is now that my perspective has changed and 32 does not seem so old.  She likely was very accomplished in her work and life, but just so happened not to have yet found Mr. Right. 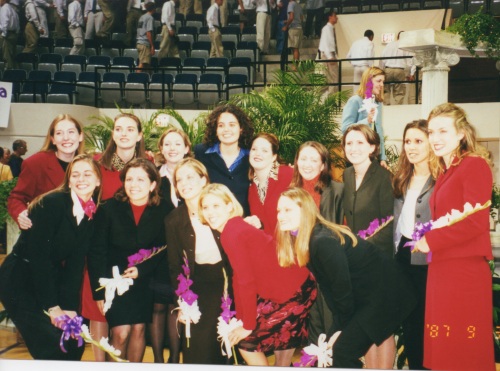 During homecoming chapel, each of the coming home court was introduced.  I remember there being very little to say about the single woman.  The bulk of information used in the introduction of each of the women on the coming home court revolved around husband and children, of which she had none.  As such, it seemed as if she had not done much with life.  I would venture to bet, however, that she had done some super interesting things.  During that time in my life, however, I simply felt sorry for her.

And now I find myself coming back to ACU as part of the coming home court., at the old age of 32.  I married my husband, Scott, three years ago, when I was 29, though we have not yet tried to have kids.  Our marriage was announced in the ACU Today magazine.  We were the only wedding announced, in the midst of announcements of couples having their second and third children.  Prior to getting married, I lived in London, traveled Europe, went to law school in California, clerked for a judge, learned to row, bought a home and settled into life in Austin working for the Governor.  Since being married I have run two marathons, watched the Tour de France live, purchased another home and am renovating it.  I still drive the same car I did in college.  I write a blog.  But the only thing that will be reported to the students at ACU when I am introduced at homecoming chapel is my husband’s name, my occupation, his occupation, the fact that we do not have children, and my accomplishments while at school at ACU.  Yet, it is some of the other life experiences that have done more to define me.  And I wish those were the things announced in chapel.  Not because I feel like my experiences have been so special, but because it shows another way to experience one’s 20’s.  That life can consist of adventures and relationships other than that which are most traditional.  I can be a conservative, Christian woman without being married with children.  Because this is the reality that many women graduating from ACU may face, I think they should see others who have done the same.  And I think ACU is missing that message.  I can tell you from my time at ACU, that it took me a good 5 years after college to realize that I was among the majority of my demographic to wait a little while on the marriage front.  I was slow to understand that being single through my 20’s was not a failure, but in fact, simply another path.  God has led me to where I am, and God has led my friends who married immediately after college and then had kids to where they are.  Both are blessed paths; mine just so happened to be strange in the ACU world. 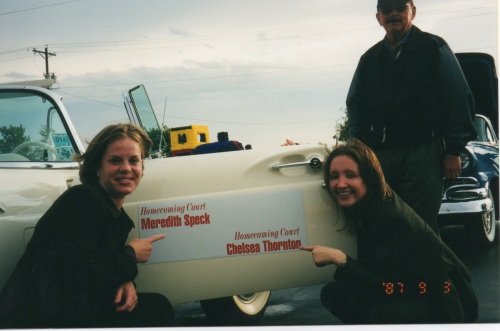 We were very proud that our names were on the car.

This entry was posted in Uncategorized. Bookmark the permalink.