During my last semester in college I began trying to figure out what I would do for the next year.  I knew I wanted to go to law school but I wanted to take a year off.  But what would I do?  I had an internship secured with a congressman in D.C. over the summer but after that, I had no plan.  Megan and I had studied abroad in Oxford, England a few summers prior, and I really fell in love with London on weekend visits during our summer.  I started talking to my friends about moving to London, thinking somebody would come with me.  But everyone seemed to have other things they needed to do.  In the midst of trying to convince a friend to come with me, I had very firmly declared that I was going to live in London, so that when everyone declined my invitation to join me, I felt stubborn enough to still go.

While in D.C. for the summer, I bought a plane ticket.  And strangely, my dad met an English attorney who was trying to build relationships with Austin law firms and as a goodwill gesture to my dad, this guy hired me to work in his London law firm.  I am not sure if the firm and my dad’s firm ever shared business but I was the great beneficiary of that attempted relationship.  I was so grateful.  I certainly did not have any other plan.

Then our family was met with excruciating heartache when a dear family friend died of a heart attack at the young age of 27, leaving behind a young, pregnant wife and a family who remain our closest family friends.  And then September 11th happened.

Should I really go?  I went.

I had a place to stay for a week of so–in a hostile.  And after one night in the hostile, I was desperate to find a permanent home for my time in London.  That became my mission.  How does one go about finding a place to live, and possibly roommates in a town in which you know absolutely nobody?  I started to go to a lot of churches.  I thought surely I could find a roommate at church.  And strangely I did.  I met a girl from Austin, whose family lived a few miles from my parents; she was in the same boat as me.  And she had two friends who were coming to London the following week  for about 6 months as well.

We found a 2 bedroom flat in Notting Hill for the 4 of us to settle, with a mean old landlord named Mrs. Hooper.  And thus began 6 months of my life in which I had my first real challenge in life.

On October 11th, my grandfather died in a car accident.  I couldn’t go for the funeral.  I had just arrived.  And that broke my heart.

But I settled into life there.  I shopped at Portabello Road Market for my veggies (and keepsakes).

I went to church at Holy Trinity Brompton, down the road from the Victoria and Albert and Harrod’s. I worked across the street from the Old Bailey and around the corner from St. Paul’s Cathedral.

I look back at those six months with great fondness.  It truly was the first time I was on my own and had to figure things out.  And I survived.  I relied on God and God came through.  In hindsight, I see now that the challenge gave me what I needed to meet the next challenge of life: law school.  I went to law school thinking, “if I can figure out London alone, I can figure out law school.”

Along with the confidence I gained in London, I discovered PG Tips, which is an incredible yummy English Breakfast Tea.

I drink it instead of coffee on mornings when I don’t feel well or when I need some caffeine but not the acidity of coffee (race mornings).  I fix it like coffee–with cream and sugar–like the English.  Yum.  I usually can find it at Central Market.

Yesterday, I ran the 3m Half Marathon with my friend Emily.  Here we are with our tired eyes–post run. 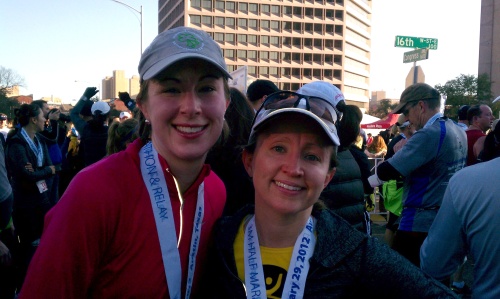 In thinking about the race, I circle back to London.  London was a challenge that gave me confidence to conquer the next.  And then law school gave me the confidence to conquer the next thing, which seemed to be running.  I got the bug to do a marathon; so I did one.  And then I had the confidence to do another.  And that made me have confidence yesterday to know that I could  run 13.1.  And now I see why life gets better with age.  We can build on the things that have gone well with the confidence in knowing that something else will go well too.  We won’t be without our failures, but having a few successes under my belt, sure helps me press along to the next hard thing.

This entry was posted in Things I like, Uncategorized. Bookmark the permalink.

One response to “Living in London.”