SXSW always proves to be a highlight for me.  I just love the buzz of the town, the opportunity to experience interesting things, and the inspiration to be creative.  This year, I had a slow start.  Mom and Rhoda did movies starting a week ago Friday while Scott and I were traveling.  Then we we came home on Sunday, I couldn’t get my life organized enough to get going with SXSW.  By the time our house guests came on Tuesday, I had nothing to show for my week.  But that all changed on Wednesday.  All it takes is a little inspiration to get going.

First of all, Mom and Rhoda started a SXSW blog.  They have only posted once and are still trying to figure out how to use pictures, but it is so fun to follow their account of the week.  You can read it here.

So my week started Wednesday morning with early morning music at the W Hotel, thanks to KGSR.  Scott came with me–he is a great buddy for stuff like this.  We were at the W by a few minutes after 6 am.  We heard My Jerusalem, Amy Cook, The Lumineers, M. Ward, Ben Kweller and Michael Kiwanuka.  Michael Kiwanuka was my clear favorite.  The Lumineers were a close second.  We ate chicken and waffles, drank coffee, heard good music, and then went to work.

On Thursday I went to hear Sugar and the Hi Lows.  I wrote about that here.  After that, I met up with my mom, snagged one of her film passes, and went to see the Central Park Effect, which is a documentary about birding in New York City’s Central Park.  The film followed charming, dorky characters who love watching birds.  It was a beautiful film, and very funny because of the characters highlighted.

Thursday night, Scott and I both went to see Blue Like Jazz.  This is based on the popular Christian book, and chronicled the life of a young guy who was the “perfect Christian church guy,” even working in a communion cup factory and volunteering for the middle school lock-in but turns away when he learns that his mother is having an affair.  He ends up going to a very liberal college, denying his faith, but then returning to a more authentic faith.  It is a beautiful story about how to be a Christian without being churchy and weird.  I loved it. 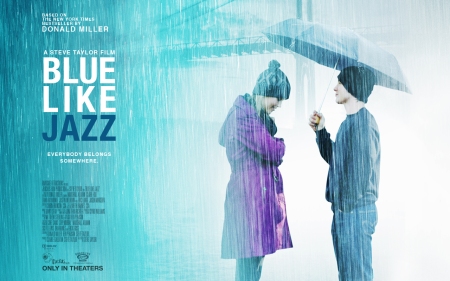 On Friday, I went with my parents to the BMI Brunch at the Four Seasons.  They got tickets through their friend who works with BMI.  Sugar and the Hi Lows played there, along with several others.  I caught the Lumineers again and liked them even more.  Bonnie Bishop was also good but nobody really spoke to me.  Mainly, I ate free food and watched all the music industry types. I loved it.

Then I met Mom and Rhoda for the Funeral Kings.  This was a film that had a lot of bad words but told a funny story about junior high boys who wanted to experience a little danger without actually being in danger.  It portrayed the junior high boy perfectly.  I laughed through the whole thing.

On Saturday, Emily came over at 6:50 am.  We ran to the W (to get our run in) for more music.  We heard some great music–and saw some big names.  Between 8 and 11, we heard Kat Edmonson, Yellow Ostrich, Ben Howard, Ed Sheeran, Givers, Citizen Cope, and Keane.  The Givers, Citizen Cope, and Keane were the absolute highlights.  I had never heard of Givers but have now downloaded some of their stuff.  Members of Mumford and Sons were also there to promote the documentary about their recent train tour.

After buying dirt for a garden, I drug Scott downtown to see the train tour documentary called the Big Easy Express.  And THAT was my SXSW highlight of the year and maybe even of all time.

I did not expect the frenzy and I probably should have.  Scott and I showed up at the Paramount at 3:10 for a 4:00 show.  It was late in the film festival, so I did not expect a big crowd.  I was unaware that this was the premiere, and that the bands would be playing after the show.  We got in the pass line with only a small expectation of getting in.  I had heard of the tour, because it came through Austin and people in my office raved about the show.  I had never heard of Mumford or Edward Sharpe before that tour.  Old Crow has been around a little while.

We did get a seat and were able to save two for Mom and Rhoda, who were coming from another film.  We were way up in the balcony.  The entire theater filled quickly and there was anticipation in the air that could not be ignored.

I sat through the entire film with an absolute grin on my face.  And I may have come close to tears at one point.  It was an incredible account of a unique tour of three bands at a time in which their popularity was sky rocketing.  I felt like I was watching them experience camp for pot-smoking musicians who found others like them.  They just understood each other and fell in love.

The crowd watching the film were obvious fans of the bands.  They were engaged with the film in a way I have never before experienced.  Wild applause erupted after every song was performed during the film.  And when the Austin High band appeared on the screen during the Austin show, the crowd went nuts, and I got a lump in my throat.  I could totally identify with the high school band kids who must have had a mind-blowing experience to have shared the stage with such incredible musicians.

Watching the film was an experience, rather than simply an opportunity to observe.  And the music afterwards looked like a musical family reunion.  I did not want it to end.

And that was my SXSW.  I didn’t stay up late.  I saw some great things.  My mind was opened.  And I met some new, weird friends.  I call that success.

This entry was posted in Things I like, Uncategorized. Bookmark the permalink.